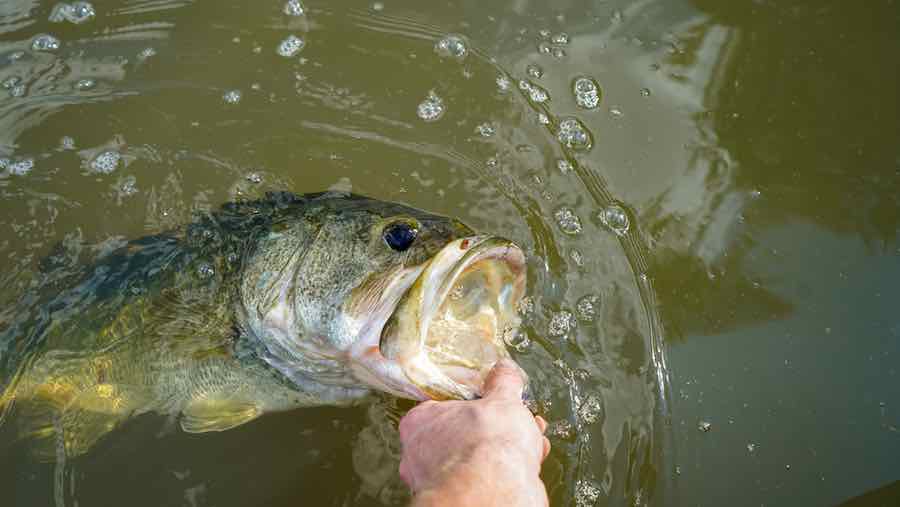 When it comes to game fishing in North America, thereâ€™s one catch that stands above the rest (due to it being seen in all 50 states, excluding Alaska) and that is the largemouth bass. In this post we’re going to cover exactly how to catch largemouth bass.

Bass are notoriously adaptable to many different bodies of water, unlike other types of bass such as striped bass, which is why they are so accessible; you can fish for them in everything from small reservoirs and ponds to large natural lakes and rivers (they can sometimes even be found in canals and ditches too!).

The reason largemouth bass have thrived for so long is mostly thanks to its distinctively massive mouth (hence the name) which allows these fish to consume a variety of different prey including ducks, snakes, microscopic plankton, and mice. Crayfish and preyfish are two of the most common sources of food for largemouth bass.

How To Catch Largemouth Bass: Does Season Matter

Largemouth bass do not have a season. That is one of the great things about fishing for them. If you can find them, you can catch them.

As a freshwater fish, largemouth bass do not migrate but stay confined to smaller bodies of water like lakes and rivers. Within these habitats you can study their behavior to get a better idea of when they can be more easily caught.

Where to Catch Largemouth Bass

Largemouth bass can be found in a variety of freshwater habitats. For example, they like slow moving rivers and freshwater lakes that do not get too cold in the winter. Largemouth bass will occupy a variety of habitats wherever they have been stocked. If the temperature is right they will most likely live in the area.

You will typically find big bass close to the shore when they are spawning in the spring as well as early summer mornings and winter afternoons. They tend to occupy areas with vegetation such as river edges, lake docks, and fallen trees. The rest of the time when they move offshore they may be near underwater structures or where the depth changes.

Any type of tackle can be used for largemouth bass. Some are more advantageous than others and companies have made a lot of money creating tackle specifically for largemouth bass fishing. You should look for a â€œmedium sizeâ€ tackle that can hold a 10-20 pound test line.

Often the more complicated lures will work for largemouth bass. It is for this reason we recommend spinning tackle which makes throwing these lures easier. It also is easier to throw your lure into tight spaces.

â€œWalking the dogâ€ is a commonly used method when using topwater lures and involves jerking the lure while reeling causing a zig zag motion. Spinning tackles makes this kind of technique much easier.

If you have ever fought a largemouth bass you know how strong they can be and how they can pull into messy underwater areas causing lost fish.

This is where baitcasting tackle can really make a difference. The reel is on top of the rod and the line is spooled parallel to the rod. These two design features give more leverage for pulling in and fighting a big fish. The other benefit is allowing for longer and more accurate casting.

A fly rod isnâ€™t going to land you a 10 pound bass but can still be very beneficial when fishing for largemouth bass. The best option is an 8 or 9 weight fly rod with a stiff backbone and fast action tip. This will allow you to cast farther and use large flies to attract any nearby bass (as opposed to smaller panfish).

Live bait will always be your best option for catching largemouth bass. Bass will eat whatever they can fit in their mouths so naturally a large sized live bait will yield a larger fish.

They do seem to prefer two types of live bait over others though; golden shiners and shads. They are large and shiny which will attract big fish. You can also try crayfish and live night crawlers.

Bass are natural and aggressive predators and therefore love to chase down prey that swim by (sometimes merely out of frustration). Artificial lures can recreate this type of action and are mostly used for catching largemouth bass.Â

Lures That Sit on Top of The Water

Topwater lures are used to attract attention near the surface of the water and a fish will strike on these under a variety of conditions. Topwater lures can have any number of features and can be used in different ways. We recommend letting it sit for a minute after casting and then popping it which will often capture the attention of a nearby bass.

Spinnerbaits are another popular lure option for largemouth bass. They have one or a few small blades that swing from the top. They are very noisy and create a wake as they are reeled or when they get near the surface. Spinnerbaits act like a topwater lure but are more dramatic. When holding them you would never believe that a fish would want to eat it but they are quite effective.

Swimming lures are meant to recreate the look of a small swimming fish and are great lures for largemouth bass. We recommend having a variety to use at different depths of water. There are some that will dive deep in the water, some bob near the surface and others that will float just below, all attracting different fish at different depths.

Rubber worms are generally the most effective for catching largemouth bass. There are a wide variety of ways they can be rigged and bass will hit anything above them but also pick up slow moving prey on the bottom. With a rubber worm you can move it through thick vegetation on the shore or add weight in deeper water.Â

Hopefully this post has helped you learn a bit more on how to catch largemouth bass. For more fishing information make sure to check out all our posts on The Broken Reel.